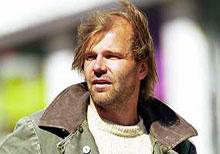 In Finnish with English Subtitles

Raid is based on detective stories by author Harri Nykänen and made into a 12-part series. The story is about a police officer who has been investigating white-collar crimes and is shot dead in a TV-studio. Another policeman takes his own life at his summer home. A young woman, an executive with a powerful electronics corporation, also commits suicide. Her embittered father suspects foul play and he invites Raid, the woman’s former boyfriend to ‘make inquiries’. Meanwhile, the police are looking for the first killer – and the trail leads inexorably to Raid. Very soon, however, they realize that the guilty party is somewhere else, and the interests of the police and the avenging angel Raid converge. The unholy alliance shows that even those with morals may, to some extent, use immoral means to achieve an end.