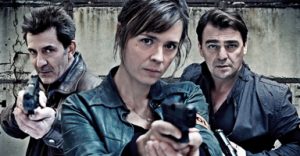 Originally released in France as Engrenages, the hard hitting Parisian cop thriller Spiral became a blockbuster sensation across all of Europe and Australia, winning awards and commendations from TV France, The Royal Television Society in the UK, and from The Academy of Television Arts and Sciences in the US. Fans around the world embraced its compelling story and naturalistic style, which even spawned a popular video game. Intentionally monochromatic photography, starkly filmed decomposing corpses, autopsies and intense interrogations set the tone for this gritty, realistic cop show. It’s a police thriller that reveals society’s ever changing codes of law: a dark series with constant and increasing tension.