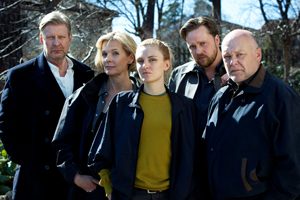 In two police thrillers, Rolf Lassgård, one of Scandinavia’s most popular actors (Wallander, Beck), assumes a powerful new role as profiler Sebastian Bergman. The films were developed by the creators of the TV movie cycle based on Henning Mankell’s original Kurt Wallander novels, a cycle that has made Lassgård famous around the world. Bergman is strong-headed, politically incorrect, abrasive – and grief-stricken, since he has yet to come to terms with the loss of both his wife and daughter in the 2004 Thailand tsunami. In the first of the two thrillers, he helps police in his home town solve the murder of a 15-year-old boy who had an affair with one of his teachers. In the second, he attempts to catch a serial killer who seems to be modeling his attacks on those of a jailed killer whom Bergman brought behind bars himself…