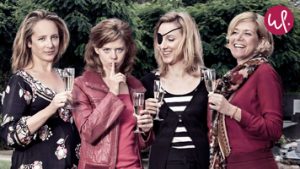 In Flemish with English subtitles

All ten episodes from the Belgian comedy drama which follows five sisters brought together by the death of their parents. After vowing to stick together, the bond between the Goethals sisters is tested following the marriage of Goedele (Inge Paulussen) to troublemaker Jean-Claude (Dirk Roofthooft). Resolving to get rid of their hated brother-in-law for the good of the family, the sisters come up with a number of ingenious schemes to murder him and make it look like an accident.