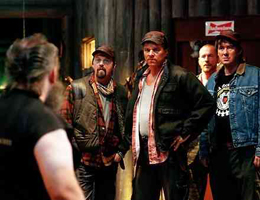 The Hunters (1996)
After working for the Stockholm police for several years, Eric (Rolf Lassgård) returns to his home village to live with his younger brother Leif and work in the local police department. At first welcomed home with open arms, Erik soon forges a path of estrangement and destruction when he single-handedly sets about solving an on-going case concerning the slaughter of local reindeer, a problem that the town cops have been plainly ignoring. When Eric learns that his brother is involved events take a further turn for the worse and violence erupts in the village as the closed-community unites against Erik s quest for truth and, ultimately, justice.

False Trail (2011)
It’s been fifteen years since Erik was forced to leave the Norrland Police Department. Since then he has become the National Murder Commission’s best interrogator. When Erik’s boss orders him back to his home town to solve a brutal murder, he hesitantly returns as the thought of going back stirs up unpleasant memories. What at first appears to be a simple murder soon proves to be something much more complicated.