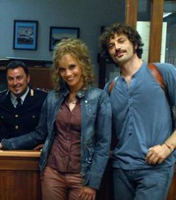 The dazzling Guido Caprino stars as Inspector Luca Manara, a dreamy man and a supervisor’s worst nightmare. He dismisses procedure and refuses to kowtow to local power players, but he’s also without ego and a gifted investigator. When Manara arrives on a motorcycle to head up the police department, his offbeat methods endear him to colleagues and build espirit de corps. He prefers to be called by his first name, doesn’t see the need for a warrant, and arrives at crime scenes via motorcycle rather than a police car. Quiet country life in Tuscany drives him crazy, but at least the new job offers a fresh start and the chance to leave broken hearts behind. The fresh start doesnt last long, however; an old female friend from the police academy, Lara, shows up for work minutes after his arrival. She’s living with her Aunt Caterina, who’s also got a nose for solving crimes. They’re an unlikely trio, but between Manara’s investigative instincts, Lara’s technical prowess and Aunt Caterina’s common sense, they get pretty good at cracking the cases.