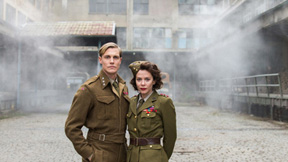 Germany, WW2. Nobel Prize winning physicist Werner Heisenberg is coopted into working for The Nazi Party to develop the nuclear weapon that will win them the war. Rjukan, Norway. The Norsk Hydro power plant falls under Nazi control and the deuterium oxide or “heavy water” that the plant produces is commandeered as a crucial element in Germany’s nuclear race.
London, England. Professor Leif Tronstad, the designer of the Norsk Hydro plant, defects to work with Allied forces. Together they plan and direct a team of British- trained Norwegian commandoes in a daring sabotage mission to destroy Norsk Hydro and Germany’s hopes of harnessing the atomic power of heavy water.
Spanning six episodes, The Heavy Water War dramatically portrays one of the most epic, yet little known chapters of WW2, telling the stories of the Nazis, The Allies, the saboteurs and the power plant staff caught in the middle.

Select a DVD to purchase from Region One,Two, or Four