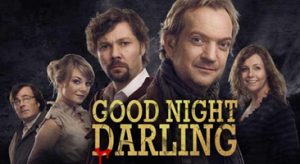 A struggling musician tries his hand at blackmail after witnessing a murder in this dark and quirky three-part miniseries based on the novel by Norwegian author Fredrik Skagen. Terje Lyngmo is a frustrated musician who ekes out a living tuning other people’s pianos. One day, on impulse, he steals an expensive video camera. Per Raglo is the managing director of a property development company owned by his wife. Their marriage is dead, and Per has long found consolation in the arms of the firm’s vivacious young financial manager. When Per’s wife threatens to put an effective stop to his philandering, he kills her. Terje inadvertently captures the murder with his camera. His first instinct is to report the crime to the police, but he changes his mind for fear that they will discover that the camera was stolen. Instead, he contacts Per and attempts to blackmail him. But these two hopeless amateurs find themselves in over their heads as both the police and their girlfriends catch on to their shady dealings…