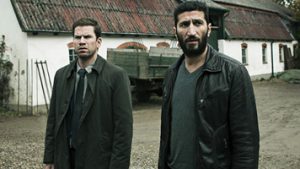 The Keeper of Lost Causes – Based on the international bestseller, the riveting first film in the Department Q series introduces maverick detective Carl Mørck (Nikolaj Lie Kaas) who, after majorly botching an assignment, is relegated to reviewing cold cases. With his new partner (Fares Fares), the moody Mørck begins digging into the unsolved disappearance of a high-ranking female politician (Sonja Richter) who supposedly committed suicide but whose body was never recovered—a mystery that plunges the investigators into a dark and disturbing conspiracy. A nonstop series of ingenious twists and shocking surprises keep the suspense simmering in this stylish thriller.

The Absent One – The decades-old murder of a pair of twins is double the trouble for the detectives of Department Q in this gripping second installment in the blockbuster series. In 1994, a junkie is convicted under suspicious circumstances of a brutal double homicide at an elite boarding school. Twenty year later, the supposedly open-and-shut case doesn’t look quite so pat to cold case crackers Carl Mørck (Nikolaj Lie Kaas) and his partner Assad (Fares Fares) whose investigation pits them against some of the most powerful men in the country who will go to extremes to bury the truth.

A Conspiracy of Faith – A desperate message in a bottle, written in blood by a boy being held captive, is received eight years after it was sent. It leads renegade cold case detectives Carl Mørck (Nikolaj Lie Kaas) and Assad (Fares Fares) to a shadowy religious community connected with a string of missing and murdered children—including two whose lives hang in the balance. The latest film in the gripping Department Q series—which have shattered box office records abroad—is another taut, tightly crafted whodunit steeped in chilling Gothic atmosphere.