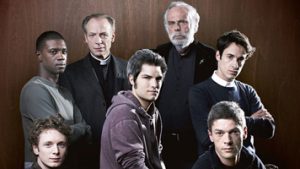 In this intense hit drama The Churchmen, five young candidates for the priesthood arrive at Paris’ Capuchin Seminary to begin their training. They come from wildly different backgrounds – Jose, a murderer just released from prison, Yann from an idyllic upbringing in Brittany, Guillaume from a dysfunctional family, Raphael from the stratosphere of privilege, and Emmanuel, on the run from a secret he can’t even admit to himself. As they prepare to take their vows, each will see their commitment to the cross tested and whether they can withstand temptations from outside the seminary walls and from their own hidden passions. They also have to find their way through an aging institution fraught with its own weaknesses, where the discord between seminary head Father Fromenger and the ambitious Bishop Roman reaches all the way to the Vatican and could rock the strongest faith.