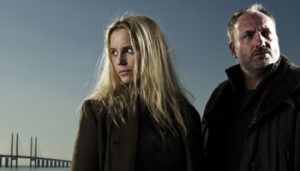 Set in Sweden and Denmark

In Swedish and Danish with English subtitles

A woman is found murdered in the middle of the Oresund Bridge, on the border between Sweden and Denmark. Police from both countries are called to the scene and what looks like one murder, turns out to be two. It’s a spectacular double murder: the bodies have been brutally cut in half at the waist and put together to form a single corpse. It’s also just the beginning of a wave of violence the likes of which no one has ever seen before. Both police forces find themselves in a race against the clock in a deadly showdown with a superior enemy, and no one will be the same when it’s over.