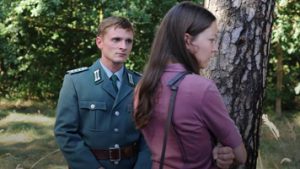 In German with English subtitles

The Weissensee Saga is a sweeping family saga of conflicting loyalties, betrayal, love and hope, set in 1980s East Berlin. Uwe Kockisch (Donna Leon’s Brunetti) stars as Hans Kupfer, a Stasi officer whose youngest son, Martin, falls in love with the daughter of a dissident singer. Their love affair sets events into motion which affect both families over a turbulent decade.

The Kupfers and the Hausmanns could hardly be more different. The Kupfers are powerful in the Communist system – father Hans and eldest son Falk are officers in the notorious Stasi secret service, and younger son, Martin, is a policeman. By contrast, the Hausmanns are dissidents. Mother Dunja is under surveillance as a singer, and daughter Julia has a record as being politically unreliable. But both families become fatefully intertwined when Martin falls in love with Julia, in defiance of his family’s political alliances. The young couple will have to take on the world and both their families to see their love through.