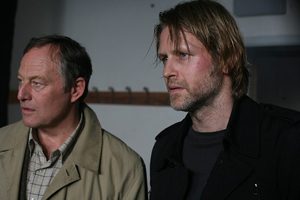 Varg Veum is a private investigator whose uncompromising and unconventional methods frequently bring him into conflict with both sides of the law. A divorced ex-child welfare worker and idealist, Varg Veum is a true lone wolf, well-versed in life’s darker side – a man who goes where the police won’t, and who knows how to get results. Behind his rough exterior and sharp verbal wit hides a warm-hearted and sensitive person, with a strongly developed social conscience and an unflagging solidarity with the common people. This modern take on the classic noir genre depicts the monstrous underbelly of the pathological crime world with hard-boiled mystery, gripping intrigue and irresistible tension.

Based on the novels by Gunnar Staalesen.