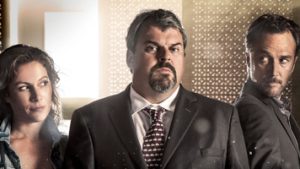 Set in the Switzerland

In Swiss German with English Subtitles

In the hit Swiss mystery series The Undertaker, actor/comedian Mike Müller stars as Luc Conrad, a former police detective turned funeral home director whose investigative instincts always seem to get the better of him. These days his job is to comfort and console the bereaved, but as soon as Luc starts to suspect foul play his inner sleuth takes over and so do the headaches for his on-again/off-again girlfriend, police inspector Anna-Maria Giovanoli. Lucky for Luc he s got a great support team at home – Erika Bürgisser, manager of the Conrad Institute funeral home and an old friend of Luc s late father, and Fabio Testi, undertaker s assistant, amateur gardener and proponent of fine Goth fashion. Filmed in the breathtakingly beautiful northern Swiss canton of Aargau, The Undertaker serves up equal helpings of sinister mystery, quirky comedy and heartfelt drama. Together, Luc and his friends make sure that no murder goes unsolved and that anyone entrusted to their care definitely leaves a good-looking corpse.

REGION 1 – Select the DVD to purchase from