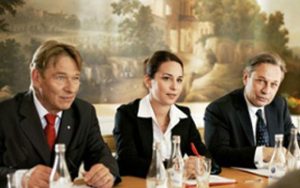 Power, the ultimate aphrodisiac. It brings out the altruist or the monster in those who have it or want it, fueling loyalty and sacrifice or betrayal and secret alliances. In this gripping political trilogy set in the power epicenter of Stockholm, agendas and oversized egos collide as Social Democrats square off with conservatives over who will command the country as it faces the challenges of the 21st century: unemployment, recession, immigration and the environment. The players not only have to contend with each other, but with angry constituents and a press that feeds off a sensational 24-hour news cycle. The unbelievably high stakes – of Sweden’s future and her place in the world – drive the brutality of the battle. Based on the best-selling trilogy by Hanne Vibeke Holst.

Those in Power is a mini series of three parts about women in politics: The Crown, The Regicide and The Sacrifice. Political intrigue, the use (and abuse) of media, and what really goes on in the corridors of power.