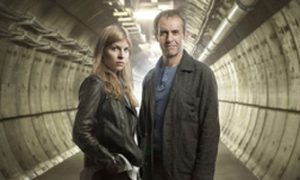 Set in France and England

In English and French with English subtitles

The Tunnel (French: Tunnel) is a British/French crime drama television series, adapted from the 2011 Danish/Swedish crime series The Bridge (Broen / Bron). The Tunnel began broadcast in 2013 on Sky Atlantic in the UK, and on Canal+ in France. The series stars Stephen Dillane and Clémence Poésy as British and French police detectives Karl Roebuck and Elise Wasserman, respectively. The plot follows the two detectives working together to find a serial killer who left the upper-half body of a French politician, and the lower-half of a British prostitute in the Channel Tunnel, at the midpoint between France and the UK. They later learn that the killer, later nicknamed the “Truth Terrorist”, is on a moral crusade to highlight many social problems, terrorising both countries in the process. As the series progresses, it is revealed that the killer’s true intention is to target Karl. (The Bridge Wannabe)