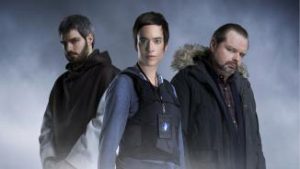 Chloé Muller, a federal police investigator, is sent to protect public enemy #1, Guy Beranger, the most dangerous child murderer in Belgium. His release on parole to the custody of Vielsart Abbey leads to public outcry throughout the country, particularly in this small village in the Ardennes. Lucas, a young idealistic monk, is entrusted with the task of evaluating the sincerity of the ex-convict’s request to enter their order. When a young girl disappears in the outskirts of the abbey, the entire village is in an uproar. Confronted by a mob thirsty for their own renegade justice and a brotherhood prepared to preserve the reputation of their abbey at all costs, Lucas and Chloé will have to join forces in order to re-establish order and truth.