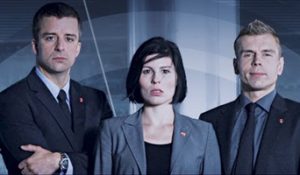 The Protectors is a Danish crime TV series from 2009 that follows the police bodyguard squad P.E.T. (Politiets Efterretningstjeneste), which is in charge of protecting VIPs, including Danish royalty and politicians. The Protectors is created and written by Peter Thorsboe and Mai Brostrøm.

The series follows three recruits, Jasmina El-Murad, Jonas Goldschmidt, and Rasmus Poulsen, who go swiftly from training camp to full fledged police bodyguards. Jasmina is the only woman, and an Egyptian Muslim, on the team.