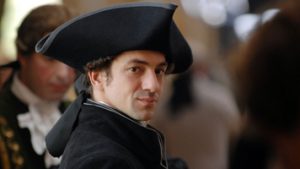 1761. Brilliant young Parisian police commissioner Nicolas Le Floch works under Monsieur de Sartine, the Royal Lieutenant General of Police. Louis XV’s kingdom is plagued by conspiracies and murders. With the help of his faithful subordinate Bourdeau, Nicolas solves mysterious disappearances and sorts out awkward scandals. From seedy taverns to the muffled hallways of Versailles, from brothels to the Chatelet prisons, he tracks and stakes out suspects, questions witnesses, gathers evidence, foils traps, and unveils plotters.

Nicolas Le Floch plunges viewers into the mysteries of 18th century Paris, a world teeming with crime, debauchery and theft. The series is a successful blend of police intrigue and melodrama, as well as a portrayal of the period’s social customs and humor. All of this is presented in great style. The characters are sensitive, original and deep. They show the eternal nature of man s passions, feelings…. and crimes. In the end, no one could be more contemporary than Nicolas Le Floch, Police Commissioner at the Chatelet.