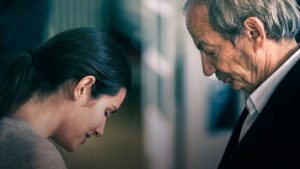 Mary Higgins Clark is the Queen of Suspense, with over 3.7 million books sold worldwide. Clark is one of the all-time bestselling fiction authors in France, where she received the Grand Prix de Littérature Policiè re in 1980 and was named Chevalier of the Order of Arts and Letters in the Legion of Honor. Now, the acclaimed novelist is reinvented in a new series of TV movies based on her most popular mysteries, with thrilling plots, gorgeous scenery and nerve-shattering suspense.

Daddys Little Girl
Sixteen-year-old Pauline was found murdered in the barn where she would rendezvous with her secret boyfriend, Raphael. Fifteen years after his trial and imprisonment, Raphael wants to clear his name but Paulines sister intends to prove him wrong. Daddys Little Girl is based on the novel of the same name first published in 2002.

Two Little Girls in Blue
Returning home from a black-tie dinner, Julie and Simon Malherbe are horrified to discover that their six-month-old twin girls have been kidnapped. The babies have respiratory problems, which makes the ransom negotiations even more excruciating. Two Little Girls in Blue is based on the novel of the same name first published in 2006.

Where are you Now?
Olivia Delmas has received a message from her missing son Mathieu on her birthday for ten years, feeding hope that one day he’ll return. Determined to bring the familys ordeal to a close, Mathieus sister Caroline sets out to find her brother. Where are you Now? is based on the novel of the same name first published in 2006.