La Piovra
(a.k.a. The Octopus) 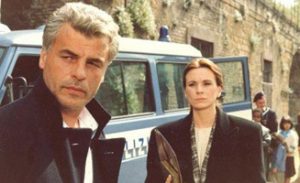 Set on the Island of Sicily

First broadcast in Italy in 1984, The Octopus (La Piovra) is an international blockbuster, running for 18 years and producing 9 follow-up series. The title of this classic Mafia thriller says it all, evoking the image of a secret criminal culture which extends its tentacles into every layer of society. Ultimately shot on three continents, The Octopus brought scope and sophistication to the story of an old battle and shows the cost men and women pay when they stand up to the injustice of organized crime. In Series 1, Michele Placido stars as Chief Inspector Corrado Cattani, who arrives in Sicily full of resolve for the task of investigating a pair of high-profile murders. When the Mafia starts to push back, his convictions erode and he ends up compromising to save his life, and that of his family. What will prevent him from taking his own ruthless revenge against the Sicilian Mob?

Region 1 – Select a DVD to purchase from