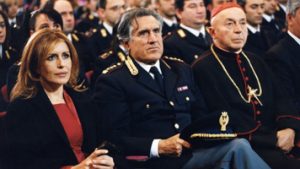 Inspector Federico Vivaldi is an old-school cop in a new world: his son is gay, his wife has left him and he’s got an ambitious colleague nipping at his heels to take over his position. He may be old-fashioned but he’s resilient enough to find his way in the new reality. His son, Stefano, is also a cop, and father and son make a good team solving crimes together in the northeastern Italian city of Trieste. Each has different strengths: Federico’s a veteran investigator with finely honed instincts, while Stefano takes a more rational approach using the latest forensic tools. Together, they investigate cases ranging from insurance fraud to murder and human trafficking. Their toughest challenge involves the murder of a math professor who had been solving some equations linked to the long-ago kidnapping and murder of a young woman. When Federico’s best friend and former colleague gets called in as a suspect in the same cold case, it seems as if his world has turned inside out. Through all the changes and surprises, Federico keeps holding on to the dream of winning back his ex-wife, Laura. During their separation, they’ve continued to communicate and stand together as parents. When they learn of Stefan’s homosexuality, they each strengthen their relationship with the son they are proud of and love dearly.