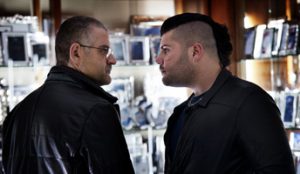 Based on Robert Saviano’s bestselling book, this gritty Italian crime drama paints a portrait of the brutal Neapolitan crime organisation the Camorra, as seen through the eyes of Ciro Di Marzo, the obedient and self-confident right-hand man of the clan’s godfather, Pietro Savastano.
Hard-hitting, Italian crime drama directed by Matteo Garrone, based on the non-fiction book by Roberto Saviano, who was forced into hiding after the book’s publication. The film takes an unglamorous look at the extent to which the city of Naples is controlled by the Camorra mob, a network of families whose influence extends beyond the underground world of organised crime and into the everyday running of the city. Five intertwining stories show the effects of mobster rule on Neapolitan citizens from all walks of life.

Region 2 – Select a DVD to purchase from