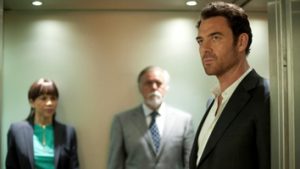 The Spanish city of Seville is the exquisite backdrop for this layered psychological thriller starring Martin Csokas as Javier Falcon, a Chief Inspector in the Seville police–a flawed and complex character investigating homicide whilst battling his own demons and troubled past. This series is adapted from two of Robert Wilson’s acclaimed international bestselling Falcon novels: The Blind Man of Seville and The Silent and the Damned. Beautifully shot and hauntingly atmospheric, Falcon is an adrenaline-fuelled drama of sin and redemption.
The Blindman of Seville
Javier Falcón investigates a series of brutal murders, which lead him to uncover shocking buried truths about his own family history.
The Silent and the Damned
The sudden death of an eminent Sevillian businessman draws Falcón into a dark conspiracy involving corruption and abuse at the highest level, forcing him to make some difficult moral choices.