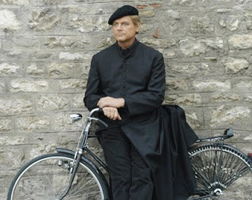 Don Matteo is a thoroughly ordinary Catholic priest with an extraordinary ability to read people and solve crimes. He’s a parish priest who never met an unjustly accused person he didn’t want to help. In fact he never met anyone marginalized he didn’t want to help: the elderly the homeless the immigrant the unemployed. He sees them all as he bicycles along the streets and through the countryside of his parish. He’s a hometown boy who was baptized and ordained in Gubbio and is beloved by just about everyone in this stunning Italian mountain village. His easygoing manner endears him to people making it easy for them to reveal their secrets when they get into trouble. His friend and chess partner is policeman Marshal Cecchini who slips him information about new cases much to the chagrin of the police chief who isn’t at all thrilled about the collaboration. But he’s in agreement with Don Matteo about one thing: the importance of justice being served. Don Matteo has one more concern besides justice: to bring a word of hope to the culprit no matter what the crime. These simple tales of redemption and humanity will bring inspiration a chuckle and a smile.