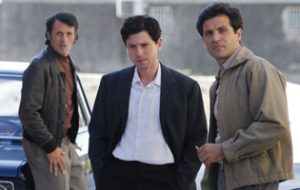 Set on the Island of Sicily

The many tales and legends of the Mafia have filled film and TV screens as long as we can remember, some unforgettable, some not so. This 6 part series that first aired on Canale 5 in Italy is one of the unparalleled best. Big in budget, and in passion, it paints the tale of Salvatore “Totto” Riina from Corleone. Claudio Gioe, himself from Palermo, plays Riina. Other stars include Daniele Liotti as Biagio Schiro, Simone Cavallari as Teresa, and Bernardo Provenzano is played by Salvatore Lazzaro.
Corleone narrates the life of mafia boss Totò Riina between 1943 and 1993. From a difficult adolescence to his rise to power within “Cosa Nostra”, passing via the many bloody episodes which saw his ascent.

Region 2 – Select a DVD to purchase from

Region 4 – Select a DVD to purchase from