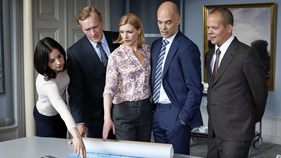 With eight weeks to go until the Swedish national elections, a local representative for a right-wing political party is brutally stabbed and killed in the town of Uddevalla. In Stockholm, Justice Minister Gunnar Elvestad urgently needs replacement for his chief of staff, who has disappeared under mysterious circumstances. Elvestad has the perfect candidate in mind: his former aide, Elin Hammar, whose first task is to find out what happened to her predecessor. The deeper she digs, the more she finds the trail points to Uddevalla and a possible connection between the chief of staffs disappearance and the politicians murder. Meanwhile, a series of terror attacks spreads fear throughout Sweden. A neo-Nazi group called Veritas has declared war and will do whatever it takes to destabilize the country as the clock ticks relentlessly down to election day.

Select a DVD to purchase from Region One or Region Two