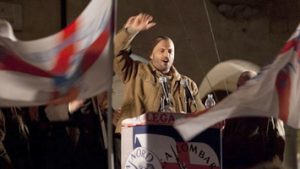 It’s February 17th, 1992. A second-tier politician, Mario Chiesa, is arrested in Milan. Not such an unusual event, but this one turns out to be very different. This is an arrest that will trigger a series of investigations the like of which Italy has never seen before – Tangentopoli. Also known as “Clean Hands”, this period offered Italy real hope of a bright future, free of corruption.
In this 10 part series, an idea by actor Stefano Accorsi comes brilliantly to life – how did this scandal affect ordinary Italians? Six lives are woven throughout the real-life facts and characters in an attempt to unravel the complexities of Tangentopoli, and to begin to empathise with Italians as the illegalities that have been woven into the system’s fabric begin to unravel. Truly gripping television.

Select a DVD to purchase for Region Two or Region Four